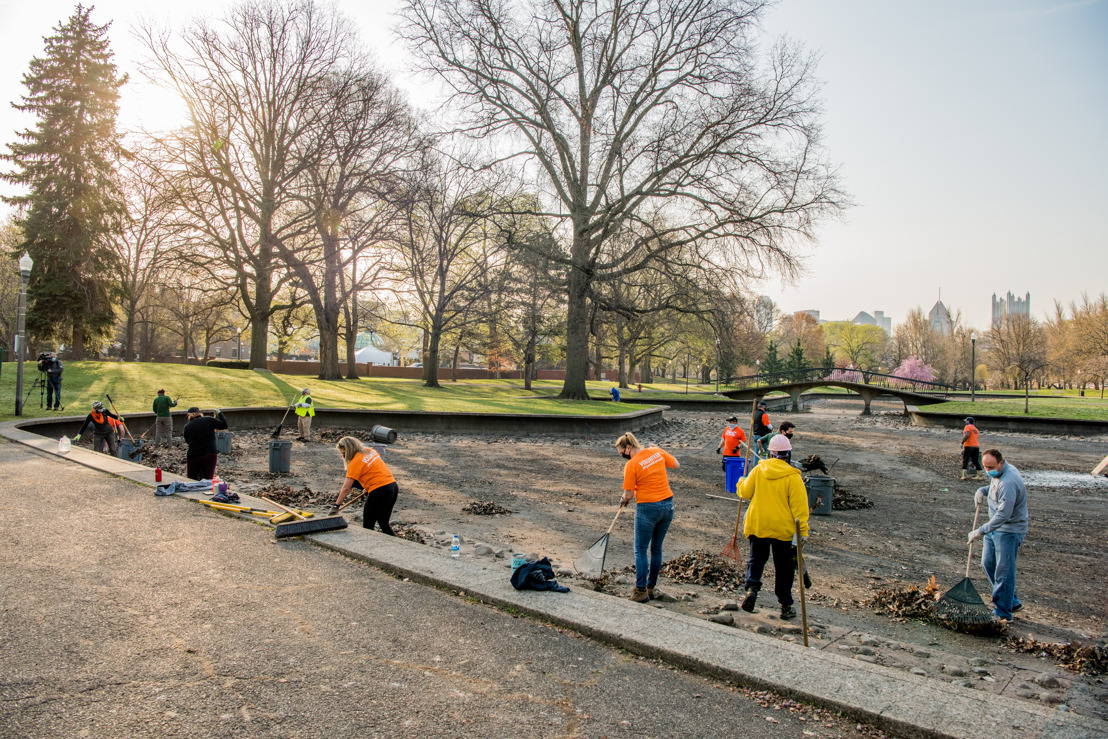 On April 6 and 7, several DLC employee volunteers participated in the Pittsburgh Parks Conservancy and Allegheny CleanWays’ annual “What the Muck?!” event at Allegheny Commons Park in the North Side. The goal of the event is to clean Lake Elizabeth, a man-made lake on the west side of the park, which is emptied for the winter. In the spring, the concrete base of the lake is full of “muck” and must be cleaned before being filled with water again.

During the two days, 35 employee volunteers thoroughly cleaned the base of the lake and filled an Allegheny CleanWays truck with muck. On the first day, Pittsburgh Today Live broadcasted from the event and witnessed a volunteer pull a turtle from the muck.

In addition to cleaning the concrete base, volunteers weeded and mulched trees around the park. Last year, DLC's Vegetation Management team planted nearly 60 trees in the area as part of another event.

On April 22, nearly a dozen DLC employees honored Earth Day by volunteering with Repair the World Pittsburgh at Sunny’s Community Garden, a newly established garden in Pittsburgh’s Lower Hill District. Unlike other community gardens where residents rent plots of land, Sunny’s will provide free produce for anyone in the community and also include open gathering areas. Volunteers helped prepare the garden for the season by filling soil beds, laying wood chips, building a walkway, planting flowers and constructing a fence.

Learn more about the garden in this article by the Pittsburgh Jewish Chronicle.

On April 30, DLC continued its annual recognition of Arbor Day by volunteering for two tree-planting projects. That morning, the company’s Vegetation Management team partnered with the City of Pittsburgh Forestry Division to plant utility-compatible trees in Highland Park along Stanton Avenue. For the past 20 years, DLC has partnered with the City of Pittsburgh and the Forestry Division on tree plantings across the Pittsburgh region, and educating local residents and DLC customers about "right tree, right place."

Photos by Sam Hartzman of DLC

On the afternoon of April 30, nearly 20 DLC employees joined Friends of the Riverfront for a volunteer event along the Three Rivers Heritage Trail. Despite rainy conditions, volunteers weeded and mulched native trees and shrubs along the trail. They also picked up trash and prepared a garden bed to be filled with native flowers this fall.

Visit DLC’s website to learn more about the company’s commitment to the community.